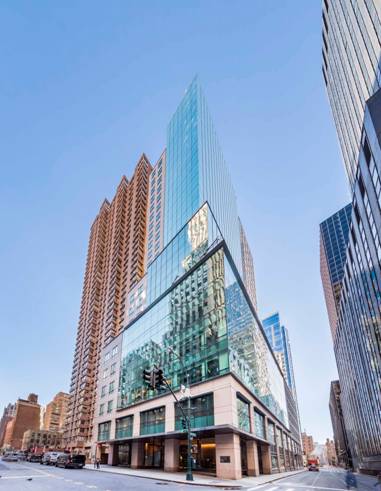 Commerz Real has purchased the 25-storey office building “222E 41st Street” in New York City for its hausInvest open-ended real estate fund. Since recently the building has accommodated a medical centre belonging to New York University (NYU) under the brand name “NYU Langone”, under which NYU already operates three hospitals and various medical centres in the metropolis. The seller is the REIT Columbia Property Trust; the purchase price totals approx. 332.5 million US dollars.
Since 2016 there has been a so-called “true net” lease agreement, i.e. all the management and maintenance costs and risks are borne by the tenant, with NYU for the lettable area of 36,000 square metres. The residual term is 30 years; rent increases have been agreed upon contractually. “222E 41st Street” was developed by Tishman Speyer in 2001 “and thus ranks among the small number of newer buildings in midtown Manhattan,” explains Henning Koch, Global Head of Transactions at Commerz Real. NYU is currently conducting conversion work for future medical facilities; this work is to be concluded by August 2018.
The property is located three blocks from New York’s landmark building Grand Central Terminal, the world’s largest railway station with 44 platforms, one of the city’s most important public transport hubs and the terminus for the Metro-North commuter trains. The real estate sub-market “Grand Central” is home to a number of world-famous skyscrapers such as the Chrysler Building and the MetLife Building. At present the area is seeing extensive development funded by public bodies and private investors. “We plan to retain this premium property in the long term, if only for the outstanding location and the excellent lease agreement,” confirms Koch. “Thus our investors can best profit from rising rental income and future value appreciation.”