(Commerz Real: Premature Lease Renewal at “ Rives de Bercy” Office Property in Paris)
Crédit Foncier prematurely extended its lease for the  “Rives de Bercy” office property by another seven years through the end of 2021. The office scheme has a gross lettable area of 31,942 square metres, occupied by Crédit Foncier as the building’s sole tenant. The original lease, which would have expired in 2018, included a break option that would have permitted the tenant to give notice as early as 2015.
The property is held by Commerz Real’s French real estate investment trust (REIT) CeGeReal whose IPO at the Paris Stock Exchange dates back to 2006. CeGeREAL specialises in prime office real estate in the Greater Paris area. Commerz Real’s open-ended real estate fund hausInvest holds a 59.8 percent interest in CeGeREAL, making it the majority shareholder.
Rives de Bercy consists of an eight-storey office complex open to flexible structuring, and includes a fully featured restaurant seating 560, a cafeteria seating 80, and an auditorium seating 150, as well as an underground car park of around 660 slots. The spacious glassed-in lobby of the building extends over five floors, providing transparency between the Seine riverfront and the landscaped courtyard.
The office scheme is situated in Charenton-le-Pont southeast of Paris, on the riverside drive Quai de Bercy close to Port de Bercy. It has access to the motorway orbital, which puts it in convenient reach of downtown Paris and all major arteries in the region.
Source: Commerz Real 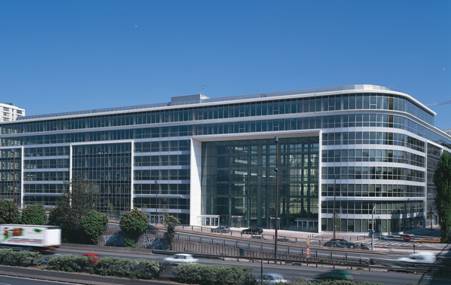