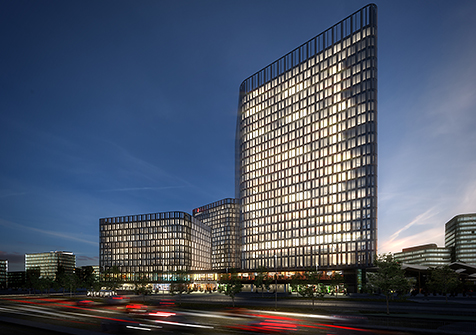 Under the auspices of Allianz Real Estate, the landmark office project “THE ICON VIENNA”, which is situated close to the new central station in Vienna, has now been fully acquired for several Allianz companies, including Allianz Lebensversicherungs-AG and Austrian Allianz Elementar Versicherungs-AG.

The property was sold by SIGNA Development Selection AG. The investment volume amounts to over EUR 500 million.

“THE ICON VIENNA” comprises three office towers located directly at Wiedner Gürtel. These buildings have direct access to the main hall of the railway station with connections to the underground and sub-urban railway networks in Vienna, as well as to long-distance services. The total gross floor space amounts to 88,000 square meters. The property, which is currently undergoing construction – with completion scheduled in the second quarter of 2018 -, boasts attractive layout possibilities on each floor and high-end furnishings, such that the demand for the office space from tenants is already high. Allianz is then expected to assume ownership in the 4th quarter of 2018.

“Following its completion, the ICON will become an architectural landmark,” Annette Kröger, CEO of Allianz Real Estate Germany GmbH, explains. “In addition to the inner city area, the market for offices located near the central station is the new office hotspot in Vienna.”

Allianz was advised by CMS, EHL and Galleon Capital during the transaction.