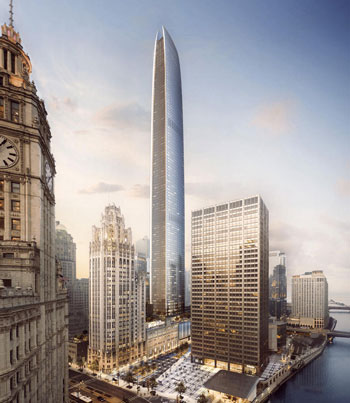 Developers on April 16 unveiled plans for Chicago’s second-tallest skyscraper, a tapering shaft of metal and glass that would soar above historic Tribune Tower, resemble the top of Batman’s black mask and be only 29 feet (8.8 meters) shorter than Willis Tower.

If completed, the $1 billion-plus project to repurpose Tribune Tower and build a skinny, 1,422-foot (433.4-meter) high-rise just northeast of it would bring more than 700 residences and 200 hotel rooms to an area north of the Chicago River.

The developers, Chicago-based Golub & Co. and CIM Group of Los Angeles, will seek a rezoning to build the skyscraper, which would supplant Trump International Hotel & Tower as the city’s second-tallest. In June 2018, the Chicago Tribune will move from its neo-Gothic Michigan Avenue complex, its home for nearly a century, to One Prudential Plaza. CIM Group and Golub bought the Tribune property from Tribune Media, a separate broadcasting concern, for $240 million in 2016.

In the first phase, their plans call for 163 condominiums at Tribune Tower, which would retain its familiar name. The first units would be occupied in early 2020.

Plans for the new tower, which could start construction in late 2019, call for a 200-room hotel, 439 rental apartments and 125 condominiums in its upper reaches. The skyscraper would rise from what is now a surface parking lot behind Tribune Tower.

In contrast to the historic skyscraper’s filigreed crown of flying buttresses and pinnacles, the top of the new one would consist of curving glass walls extending beyond the building’s occupied floors. It would resemble the top of Batman’s mask — an unintended likeness that Golub Executive Vice President Lee Golub acknowledged in an interview before Monday’s meeting.

Asked why he didn’t push for another 30 feet (9 meters) in height, which would have made the proposed skyscraper Chicago’s tallest, Golub replied that height was a secondary priority to the ideal mix of units and floor heights.

As the saga of the unbuilt Chicago Spire shows, it is easier to announce plans for a supertall skyscraper than to finance and build one. Complicating matters for Golub and CIM Group, other developers already have mega-towers underway or approved, most notably the 1,191-foot (363-meter) Vista Tower, a hotel and condominium high-rise under construction across the Chicago River from the Tribune site.

The bigger question, nearly a decade into the city’s post-recession real estate boom, is whether the expansion will still have steam more than a year from now, when the new tower is scheduled to start construction.

“We are on Michigan Avenue. We are on the river. We are in the center of everything here,” he said.

Condos in both buildings would sell at prices at or near the top of the Chicago market — more than $1,000 a square foot, Golub predicted. With condos in the new building and Tribune Tower expected to average 3,000 square feet (278.7 square meters) and 2,700 square feet (250 square meters), respectively, that means many condominiums would fetch prices in excess of $3 million.

In January, when the Tribune reported that plans for a supertall skyscraper next to Tribune Tower were in the works, Ald. Brendan Reilly, 42nd, indicated a general openness to the project’s height but reserved the right to press for design changes and lower the number of parking spaces. At the time, the plans called for the new skyscraper to rise 1,388 feet (423 meters), a foot shorter than Trump Tower. Since then, the plans grew, though not, the developers insisted, because of a desire to top the tower built by the current president.

The conversion of Tribune Tower is expected to cost more than $500 million, with the development of the new tower easily eclipsing that figure.

The new tower plans were shaped by Adrian Smith + Gordon Gill Architecture, whose portfolio includes a tower under construction in Saudi Arabia that will, if completed, eclipse Dubai’s Burj Khalifa as the world’s tallest building.

The designers of the Tribune Tower conversion are the Chicago firm of SCB, or Solomon Cordwell Buenz, which specializes in new condominium high-rises. Vinci Hamp Architects of Chicago are the historic preservation