Some 20,000 international real estate executives from 79 countries defied the inclement weather which hit travel infrastructure across northern Europe this week to attend what many described as the most active MIPIM since the 2008 economic downturn.
With research from leading property consultants and services companies indicating that new capital is coming into the market, international cities, companies and regions used MIPIM to promote themselves to the 4,300 investors in Cannes.
One of the hot topics on the exhibition floor at MIPIM was the changing nature of investment strategies and vehicles. According to KPMG research, pooled funds are back in favour and are now considered as attractive as direct holdings/separate accounts. KPMG’s Partner and Head of Real Estate, Stefan Pfister, shared the data with delegates attending the second edition of the RE-Invest summit at MIPIM.
“RE-Invest has established itself as an important part of the MIPIM menu,” reported MIPIM Director Filippo Rean. “This year, we have welcomed a record 60 pension and sovereign wealth funds to Cannes.”
Information released by real estate services and consulting specialists DTZ during MIPIM, indicated that some €253 billion of new capital will be available for investment in commercial property this year, with €63 billion targeting Asia Pacific.
Cushman & Wakefield’s European Real Estate Lending Survey predicted that capital available for European real estate lending in 2013 will be 22% higher than last year and global property advisor CBRE identified Germany as the number one target for European investors and London as the most attractive European city.
In 2012, London recorded its highest volume of transactions since 2007, according to CBRE, with the majority of purchases coming from cross-border investors.
Returning to MIPIM for a fourth time, Mayor of London, Boris Johnson, unveiled ambitious plans to create Britain’s largest ‘floating village’ in a 6-hectare site at London’s Royal Victoria Dock. In a tour de force keynote address, Johnson challenged investors to come up with spectacular designs for the project.
Boris Johnson was one of a host of mayors from major international cities who were in Cannes. Among them, Mayor of Moscow, Sergey Sobyanin and Mayor of Istanbul, Kadir Topbas representing two cities that feature prominently on investors’ radars and which are currently making strenuous efforts to facilitate cross-border investment.
Flying the French flag, a raft of new and on-going projects in Paris, Lyon, Bordeaux, Marseille, Lille, Grenoble and Nice were on display, with two of the country’s most emblematic political figures, Mayor of Lyon Gérard Collomb and Alain Juppé, Mayor of Bordeaux, actively promoting new development in their cities to international investors.
“As Boris Johnson said in his keynote address, cities are once again seeing their skylines dotted with construction cranes. This has been reflected by the number of new projects presented at MIPIM, not just from Europe, but also from Asia and a growing representation from such Latin American countries as Brazil, Chile and Argentina,” noted Filippo Rean.
During a MIPIM conference devoted to ‘Brazil: new grounds for development,’ shopping centres and logistics were identified as prime investment targets, particularly in Rio de Janeiro, with international investors being advised to partner with local companies.
Brazil is set to feature strongly at MIPIM 2014, alongside Russia and Turkey, as part of next year’s ‘Key Investment Destinations’ programme.
“This year we featured Turkey as MIPIM’s Country of Honour and were proud to welcome Deputy Prime Minister Ali Babacan and 190 Turkish companies to Cannes,” commented Filippo Rean. “Istanbul is attracting incredible investment interest. The country has a young population, predicted GDP growth of 4.3% in 2013 and a fast-developing retail sector. Instead of choosing a single Country of Honour in 2014, we want to provide a window onto Turkey, Russia and Brazil.”
For John Forrester, DTZ’s Chief Executive, EMEA, “Turkey was a great choice for Country of Honour. What we have seen at MIPIM this week is that investors in particular are looking for new opportunities and to increase their understanding of markets beyond well-established territories in Europe.”
Reflecting the continued debate on the future of cities and the role that new technology will play in urban planning and property construction, the inaugural MIPIM Innovation Forum (MIF) brought together leading international architects, tech companies and major end-users.
“I think the MIPIM Innovation Forum is an excellent initiative and particularly at this time of convergence between the digital and physical worlds. It brings together different players – architects who are passionate about new technologies, technologists exploring urban and ubiquitous computing and property industry operators interested in bringing all of this to life in tomorrow’s development,” said Carlo Ratti, Founding Partner of carlorattiassociati and Director SENSEable City Lab, Massachusetts Institute of Technology (MIT).
Logistics, a growing segment of the real estate market represented at MIPIM, is also attracting investor interest. For the second year, the MIPIM exhibition floor hosted a dedicated Logistics Pavilion.
This week in Cannes, Mitsubishi Corporation’s real estate asset management subsidiary Dream unveiled its €230 million Dream Logistics Fund 3, which unlike the first two funds, is open to overseas investors and Blackstone Managing Director, Jonathan Lurie reported that his company is looking to acquire logistics assets in Germany, the Netherlands and Italy and grow its presence in Poland.
“In 2014, MIPIM will celebrate its 25th edition. Our core clients have remained loyal to the event over the years and we’re very grateful. MIPIM has grown in line with the international real estate market, allowing us to introduce dedicated programmes for investors, for mayors, for people operating in logistics, hotel and tourism and for the increasing focus on building innovation and sustainable urban policies,” commented Filippo Rean.
“2014 will be particularly exciting as, in addition to MIPIM in Cannes and MIPIM Asia in Hong Kong, we are launching MIPIM China in Shanghai, which will be an exhibition, conference and networking event dedicated to the Chinese real estate market. Next year we will celebrate a quarter of a century of MIPIM and look forward to the next 25 years,” concluded the MIPIM Director.
Source: Company 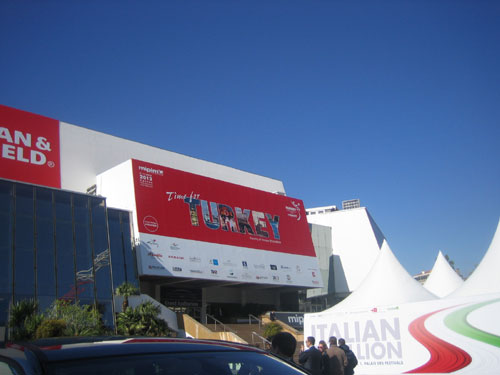