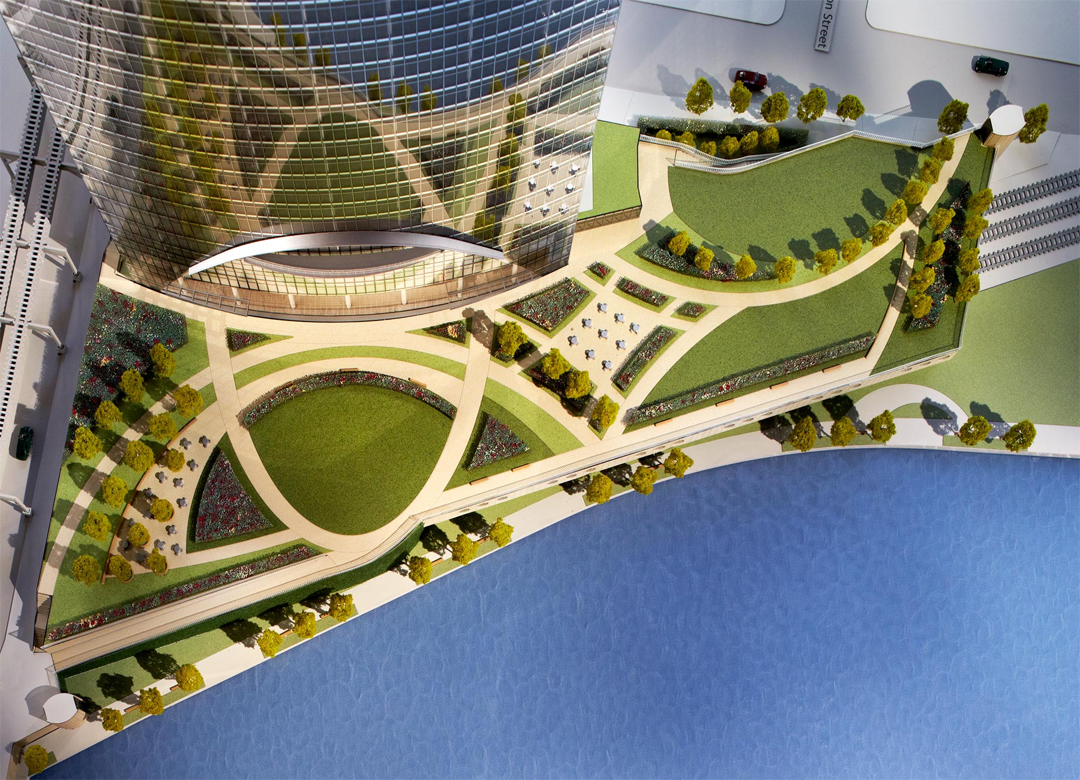 Ivanhoé Cambridge, one of the 10 largest real estate companies in the world,  and co-investor and developer  Hines, announced the start of construction of River Point, a development including a 45-story office tower and a 1.5-acre public park in downtown Chicago’s West Loop. The project is being developed with land partner Larry Levy.
River Point was designed by noted architectural firm Pickard Chilton, and is being constructed at 444 West Lake Street on the western bank of the Chicago River near two commuter rail hubs and overlooking the river toward Lake Michigan. Containing approximately 900,000 square feet of leasable space, the tower is pre-certified LEED Gold.  The project will be ready for initial occupancy in 2016.
Dignitaries presiding over the Tuesday afternoon groundbreaking ceremony were:  Mayor Rahm Emanuel; Daniel Fournier, chairman of the board and chief executive officer of Ivanhoé Cambridge; C. Kevin Shannahan, CEO of Hines’ Midwest and Southeast regions; and Larry Levy, chairman of The Levy Organization.
According to Mayor Emanuel, «This is a momentous day for the City of Chicago, as this is the first office building to come out of the ground in Chicago in years.  River Point is an example of smart growth and job creation for our city, which is leading the nation in economic development, and I am proud that there is enough confidence in the city’s economic landscape for this project to come to fruition».
«River Point will be an exceptional property, built to the highest standards of sustainability and offering tenants world-class office space» explained Fournier.
«River Point will be a striking addition to Chicago’s skyline and the first in a new generation of office buildings.  There is significant interest from major corporate tenants » commented Shannahan.
Source: Company