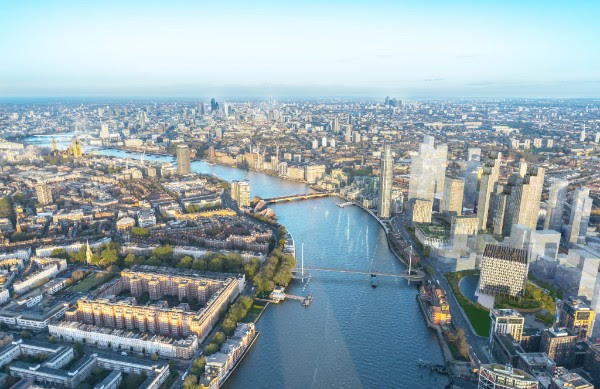 The master plan offers more than 20 acres of surplus land for residential-led, mixed-use development, securing the new fruit, vegetable and flower market facility’s future in the local neighbourhood on a cost-neutral basis. The plan also ensures the retention of a key local employment zone providing more than 2,500 directly employed jobs.

In addition to the 500,000-square foot wholesale market facility, SOM’s hybrid planning application for the new neighbourhood will introduce up to 3,000 new homes, 135,000 square feet of office space, and 100,000 square feet of retail, leisure, and community venues.

“Work is progressing on the redevelopment of the market and we are currently working with China based R&F Properties to develop over 2,000,000-square feet of mixed-use development on the original flower market site within the framework of the master plan.”

“We could not be more pleased professionally to have supported Vinci St. Modwen and the Covent Garden Market Authority in the delivery of ‘the final piece’ of the Vauxhall Nine Elms Battersea Opportunity Area vision, to create a much-improved market integrated into an emerging and vibrant new district for London.”

The entire scheme is set alongside the emerging Nine Elms Linear Park, stretching from Vauxhall to Battersea Power Station and engaging the American Embassy. The area also benefits from the extension of the Northern Line and the opening of two new London tube stations, connecting people living and working in Nine Elms to the urban core and beyond. The entire New Covent Garden Market site will be within a five-minute walk of public transport.

Working together, SOM and Building Design Partnership (BDP) have delivered a seamless master plan that will increase the permeability and connectivity of the district with the new park, the River Thames, and the city beyond. Following the agreed master plan, BDP developed the detailed design of the market facilities, while SOM developed the hybrid planning submission for the Surplus Lands sites. The plan calls for the integration of a new outdoor market space, local culinary shops and restaurants within future private development adjacent to ‘The Garden Heart’, CGMA’s flagship building and public front to the future market.

“Our vision for the Surplus Lands sites integrates future residential-led, mixed-use development into the ever-changing local area. The schemes for the northern and entrance sites will become gateways into the Nine Elms Linear Park and provide a significant percentage of the district’s future open space network. The project also provides an exemplar for comfort of living and community amenity integrated within high density urban regeneration.”

Since obtaining the complex planning approval for future development, the Northern Site – or Nine Elms Square – has exchanged ownership and SOM is now carrying this major component of the Surplus Lands sites forward through to delivery with R&F Properties to provide three towers of 55, 45 and 35 storeys in the first phase. 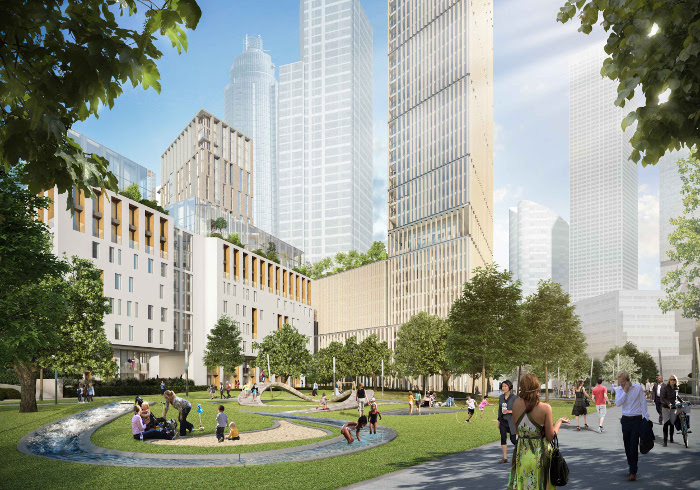 Skidmore, Owings & Merrill LLP (SOM) is one of the leading architecture, interior design, engineering, and urban planning firms in the world. Since its founding more than 80 years ago, SOM has earned a reputation for design excellence with a portfolio that includes some of the most important architectural accomplishments of the 20th and 21st centuries, and has been a leader in the research and development of specialized technologies, new processes and innovative ideas, many of which have had a palpable and lasting impact on the design profession and the physical environment. The firm’s longstanding leadership in design and building technology has been honored with nearly 2,000 awards for quality, innovation, and management. The American Institute of Architects has recognized SOM twice with its highest honor, the Architecture Firm Award—in 1962 and again in 1996. The firm maintains offices in New York, Chicago, San Francisco, Los Angeles, Washington, D.C., London, Hong Kong, Shanghai, Dubai, and Mumbai.