Located at the center of the spokes that connect greater Detroit, the Monroe Blocks development will make an impact far beyond its surrounding context, it will become a destination, an icon for the future development of Detroit. The new development will combine downtown Detroit’s first high- rise office tower in a generation with over 480 residential units.

Kristian Ahlmark, Senior Partner at Schmidt Hammer Lassen, emphasizes the context of the project: “Detroit is a unique place, I believe everyone living in the Western World has at some point been influenced or touched by Detroit. We all know or can relate to its legacy: the US automobile industry, the architecture of Albert Kahn and Woodward, and obviously the music. We are honoured that our first US project is happening in this great city. From our earliest visits, we experienced the unique optimism, energy and entrepreneurial spirit that defines Detroit. This project is very much a part of that movement. The challenge has been to create a new way of defining central business districts as a diverse and multifunctional area for the benefit of the wider community.”

The Monroe Blocks project is an important piece in the puzzle for downtown Detroit’s development, connecting some of the city’s key central public spaces: Cadillac Square, Campus Martius, Library Square and Woodward. These new connections will not only bind the city center but also enrich, strengthen and unify the already popular public spaces.

“What we’re doing from a public space standpoint within the development is going to be special,” says Dan Mullen, President of Bedrock’s real estate arm. “It’s not just a big, tall building. It’s a big, tall building that interacts with street level and public spaces throughout. There’s going to be different pods and nods of great spaces to hang out and for people to get together.”

Kristian Ahlmark continues: “From day one, we have been working alongside a team of cross-disciplinary experts. Both local architects, engineers, historical experts and many others. We try to gather as much relevant information and feedback as possible early in the process. By doing this open process, we aim to establish a sense of “best practice” amongst all stakeholders.

Our Scandinavian heritage has a strong influence on the way we approach city building on this scale. We always try to think urbanism, city space and the built environment in that order. In Detroit, we found many existing spaces that held a great amount of urban qualities, but laid undefined due to the vast amount of open space. Our project is very much about stitching together and re-establishing some of the indisputable qualities of the original masterplan. Whilst at the same time we aim to frame a new contemporary approach to city life – build on some of the keywords that Detroit is made of: Density, Dynamic and Diversity.”

The Monroe Blocks development is set to break ground in early 2018 and will complete in early 2022.

Working internationally with offices in Copenhagen, Aarhus and Shanghai, the Monroe Blocks is Schmidt Hammer Lassen’s first project in the US. The studio has been active in Canada since 2010 with library designs completed in Edmonton and Halifax, where the Halifax Central Library was awarded the Governor’s Medal for Architecture in 2016. Recently, Schmidt Hammer Lassen won the World Architecture Festival 2016 Award for Best Mixed-Use project for the Malmö Live development in Sweden. 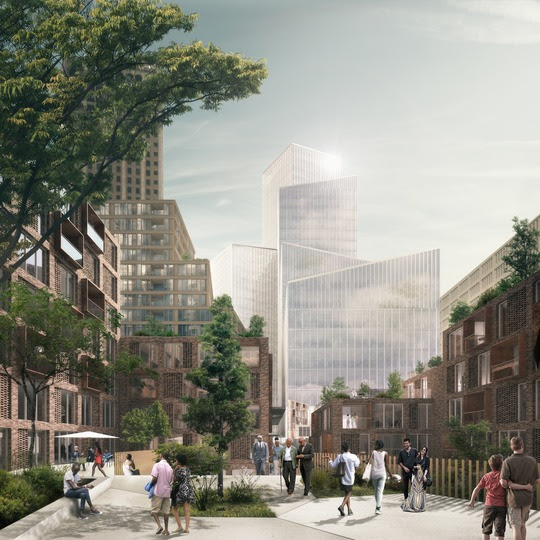