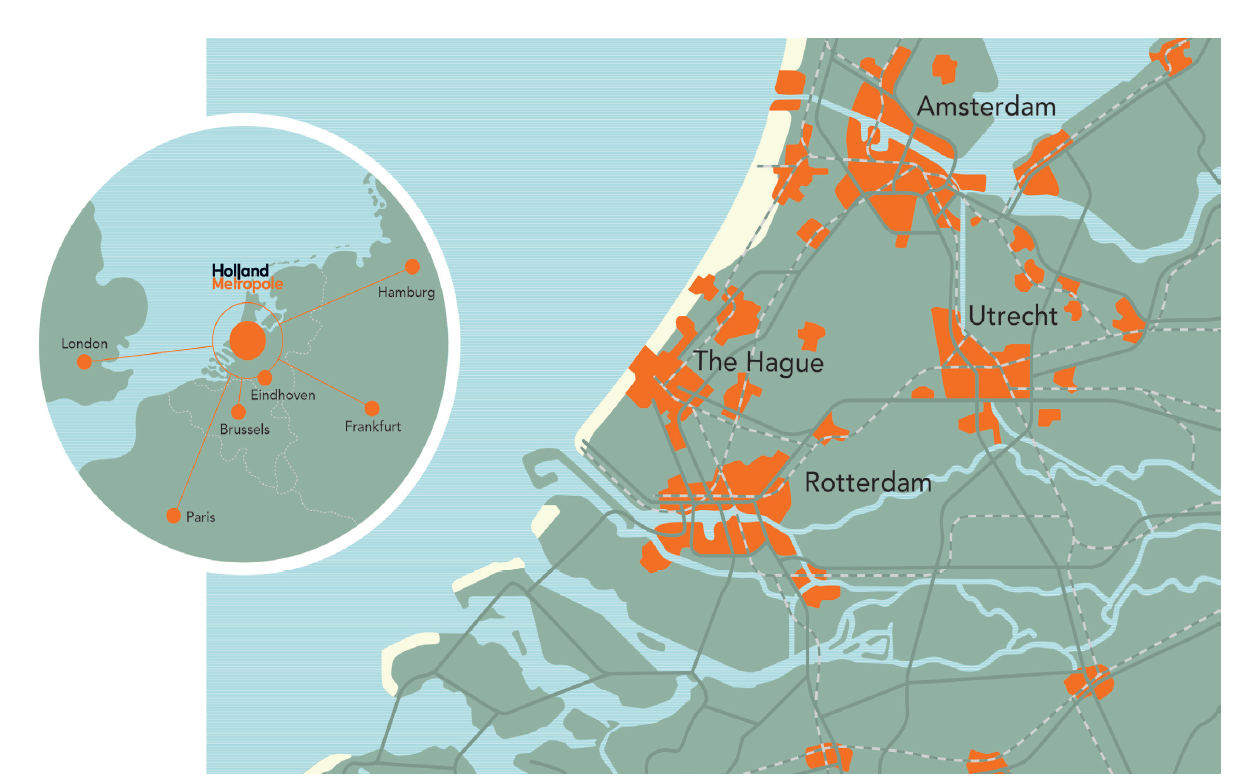 Major Dutch cities and domestic real estate investors and developers have formed an alliance within the framework of Holland Metropole, one of Europe’s most dynamic economic regions, to drive the development of one million new homes by 2030 and address a potential chronic future housing shortage created by intensifying urbanisation in the Netherlands.

(A panel of experts will discuss the Holland Metropole initiative at a breakfast seminar at the ExpoReal trade fair in Munich – “Wanted: One Million New Homes” on Thursday October 5th 09:30 – 10:45, Stand A2.232)

The Holland Metropole region encompasses the four largest cities in the Netherlands, Amsterdam, Rotterdam, Utrecht and The Hague, with an average 35 minutes travelling time between them. As a closely interconnected single urban conurbation of around eight million people clustered around a vast green heart of polders, rivers and lakes, it has the fourth highest GDP in Europe after London, Paris and Milan and is in the Top 12 of economic regions globally on a level with Greater Sydney and the Chicago Metropolitan region.

Dick van Hal, Chairman of the Dutch Association of Institutional Real Estate Investors (IVBN), said: “Dutch real estate investors and developers have all the capital and other resources we need to meet the rapidly growing demand for housing from our urban populations. But if our ambitious residential development target is to be achieved, we need the municipalities to be more flexible both in their planning regulations and in the supply of land. A severe shortfall in the housing construction pipeline could stifle growth and lead to rising house prices and rents becoming unaffordable for the average citizen.”

in the Netherlands will be completely sold out in the next few years. One million new homes by 2030 means 80,000 have to be constructed per year, but we’re currently only building around 50,000. It is crucial, therefore, to work with the municipalities and national government to speed up procedures and release more land, notably within the Holland Metropole region, as a matter of urgency.”

Eric van der Burg, Alderman in charge of Urban Development for the City of Amsterdam, said: “In the past it used to be every man for himself, but now we are looking at how we can spread the burden of housing development between all the stakeholders in Holland Metropole.”

The partners within Holland Metropole are cooperating to create a common vision of: “The City of the Future,” which is sustainable, climate neutral in its impact, and inclusive — providing a high quality of life for all its citizens. The continuing development of fast and frequent connectivity between all parts of the region, particularly through metro and railway lines, are also a crucial pre-requisite for maintaining the momentum of future growth. The government will play a vital role in delivering this infrastructure and Holland Metropole will present its future template to the national authorities in early 2018, as the first step in an engagement process to make its vision a reality.

Paulus Jansen, Alderman in Charge of Housing for the City of Utrecht, said: “Encouraging a healthy lifestyle is key to our Holland Metropole plans when accommodating the major demand for housing in Utrecht. “

Lex Brans, Director Marketing and Housing Development for the Amsterdam Metropolitan Area, concluded: “The affordability of housing is a top priority, because cities should be a vibrant mix of all types of people, regardless of income. They also need to be healthy and liveable and able to adapt to rapid technological and economic change, such as driverless cars and disruptive new business models.  Most of this adaption and growth has to be achieved within our existing urban environments. Just paving over green fields for fast results, and so mortgaging the future of our children, is just not a sustainable option.”