British Land is pleased to announce that it has acquired assets comprising the majority of Paddington Central, a 1.2 million sq ft office-led, mixed use estate close to Paddington station in London’s West End. The investment offers an attractive blend of income and capital return, with major development potential and significant future opportunity to improve the estate through asset management. On completion of the developments, British Land will own 1.0 million sq ft of a 1.6 million sq ft estate.
Highlights
Attractive real estate with significant future upside from asset management and development

Well positioned to benefit from improving local infrastructure and regeneration

Chris Grigg, Chief Executive, British Land, said: “We are delighted to have bought into Paddington Central. It is an investment which plays to our asset management and development strengths, is in line with our strategy of increasing exposure to London and replenishing the development pipeline, and one we expect to generate strong returns. This is the most significant acquisition we have made since the equity placing in March and we are confident that investment of those proceeds will now be accretive to 2014 earnings, ahead of our original objective.”
Tim Roberts, Head of Offices, British Land, said: “Managing and developing large estates in London is what we do well. With the benefit of improving local infrastructure, the regeneration of Paddington as a whole, plus our ability to improve and complete the estate, I am confident we can take Paddington Central to the next level and in the process, deliver attractive returns.”
Overview of Paddington Central
Paddington Central is an 11 acre mixed use estate in London’s West End comprising seven separate modern buildings, and a retail and leisure cluster, totalling 1.2 million sq ft. The area is well served by Paddington station, a major London rail and tube interchange with excellent connections to Heathrow airport via the Heathrow Express which will further benefit from the opening of the new Hammersmith & City Line station in 2014 and Crossrail in 2018. Paddington will be one of only three Crossrail stations in the West End, which will improve connections from the West End to the City and Canary Wharf.
The complex transaction combining a number of separate ownerships was arranged with the majority owner, Aviva Investors. British Land has acquired three of the existing buildings, together with the retail and leisure cluster in Paddington Central from funds controlled by Aviva Investors and other investors. These assets comprise 610,000 sq ft of income generating properties which are occupied by high quality tenants, including AstraZeneca, Nokia, Statoil and Accor. The quality of income is excellent, with a weighted average lease length of 10.7 years and occupancy of 91%. In addition, we have acquired 435,000 sq ft of development potential, comprising 355,000 sq ft of consented offices, which we intend to enhance and 80,000 sq ft of mixed use potential, currently occupied by Crossrail, but which reverts to us by 2018. On completion of the development, the estate will grow to 1.6 million sq ft, with British Land wholly owning just over 1.0 million sq ft.
2 Kingdom Street is the most significant property on the estate (which was jointly owned by Aviva and Avestus Capital Partners), providing 268,000 sq ft of multi-let office space. Occupancy is 84% and key tenants include AstraZeneca, Nokia and Statoil. The average lease length on this building is 11.2 years, with contracted income of £10.9 million per annum. 3 Kingdom Street is a 206 bedroom, 4 star “Novotel” hotel let to Accor. The lease length is 18.0 years, and the total income is £2.2 million per annum, subject to annual RPI uplifts. Both properties were designed by Kohn Pederson Fox and completed in 2010.
3 Sheldon Square is the second multi-let office property, comprising 143,000 sq ft of office space, completed in 2002. Occupancy is 100%, with tenants including Kingfisher, Prudential and Cerner. The average lease length is 7.8 years, and contracted income is £7.3 million per annum. Adjacent to this is the Sheldon Square retail and leisure area, a grass amphitheatre surrounded by cafés, bars and restaurants, with occupancy of 91%. The average lease length is 12 years, and the total income is £1.5 million per annum. British Land has also acquired the freehold in respect of 200 residential units sold to St. George on long leases which sit above the retail area.
The development sites of 4 and 5 Kingdom Street, which have consent for around 355,000 sq ft of offices, have been purchased at an effective price of £175 per sq ft. Design is well advanced, but it is our intention to add to, and improve, the existing consents. Subject to consent being received, we expect to commit to these developments and start on site towards the end of 2014. The expected cost to complete is around £180 million (excluding finance costs). In addition, the space beneath 4 and 5 Kingdom Street, currently occupied by Crossrail, will revert to British Land by 2018 and offers 80,000 sq ft of mixed use development potential. 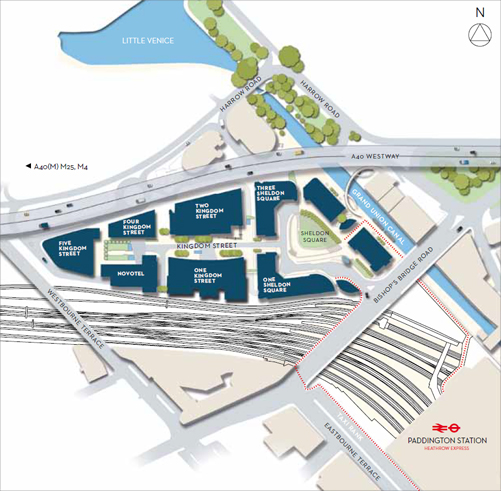