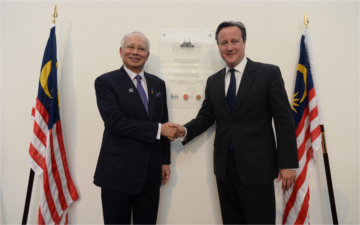 The Prime Ministers of the UK and Malaysia visited Battersea Power Station today to celebrate ground breaking at London’s most visionary and eagerly anticipated new development – eighty years after it first generated electricity and thirty years since it was decommissioned.

Work has now officially begun on constructing the masterplan, which will see this former industrial site become home to a vibrant new neighbourhood.

The redevelopment of the 39-acre Battersea Power Station site will lead to the creation of 3,500 new homes, shops, cafés, restaurants and offices, set amidst a new 6 acre riverside park and with the fully restored Grade II* listed Power Station at its heart and open to the public.

The ground breaking ceremony follows the appointment of award-winning British firm Carillion for construction works at Circus West, the first phase of the site. This followed the development’s sales launch on 10 January 2013 in London with a global launch covering the cities of Kuala Lumpur, Singapore and Hong Kong immediately thereafter. Sales contracts have now been exchanged with purchasers for 841 units at a total value of £685 million.

Commenting on this, Chairman of the shareholders’ consortium Tan Sri Liew said: “It is exactly one year since we first signed the sale contract for the acquisition of the site. To have achieved this result of not just launching Phase 1 of the development but having signed contracts with purchasers for over 97% of the available units is truly remarkable. It demonstrates the reputational strength of the consortium members and the depth of the real customer following we enjoy both at home, within Asia and increasingly in the United Kingdom.

Our marketing prowess in understanding what property purchasers want, commitment to excellence in service whether they are based in Malaysia, London or elsewhere and our UK team’s depth of understanding of the project has secured this unprecedented result. I would also like to thank our bankers, customers and stakeholders for their strong support without which we could not have come so far so fast.”

Construction works on Circus West are scheduled for completion in 2016.  Construction of Circus West  will coincide with the  renovation of the Grade II* listed Power Station itself, the largest brick building in Europe and one of the most significant surviving examples of Art Deco architecture. This will involve the iconic chimneys being painstakingly rebuilt to the precise design and specification of the originals, but to modern structural standards, and they will remain the centrepiece of the site in the new development.

Commenting on the ground breaking ceremony, the Chief Executive of Battersea Power Station Development Company Rob Tincknell, said: “This is the day on which one of London’s most keenly anticipated redevelopments has finally got underway. Eighty years since Battersea Power Station first produced electricity, and thirty years since it was decommissioned, construction works have started and the vision is becoming a reality.  Redeveloping a site which is home to such an iconic building is a massive responsibility.  An outstanding team has been assembled to undertake that work.  On behalf of the shareholders and owners, we look forward to working with all our partners and stakeholders as we work towards creating a vibrant new neighbourhood with the world-famous profile of the Power Station at its heart. ”

Prime Minister David Cameron said: “We are competing in a tough global race and the work that starts today, that will see the iconic Battersea Power Station restored and lead to the regeneration of the Nine Elms area bringing 3,500 homes and 15,000 jobs, shows that Britain is open for business. It is brilliant to see this project progressing so well, going from my discussions about it with Malaysian Prime Minister Najib and investors in Kuala Lumpur last year to the strong partnership between our countries and companies that enables us to break ground today. I am committed to encouraging more overseas businesses to invest in Britain because I am clear that this is one of the best ways to get the growth and jobs we need.”

The Mayor of London, Boris Johnson, said: “Many thought it would never happen but today is a triumphant moment in Battersea Power Station’s rebirth as well as a glowing testimony to London’s attractiveness for global investors. Once the generator of megawatts, this iconic building’s revamp is now sparking the wider rejuvenation of a once neglected part of London into a vibrant new quarter. Thanks to a multi-billion pound public and private investment, which will include a brand new extension to the northern line, the transformation of this area is set to support tens of thousands of jobs and homes for the capital.”

The Rafael Viñoly designed mixed-use master plan comprises a careful blend of residential, offices, shops, leisure and hospitality. The iconic Battersea Power Station, a Grade II* listed building, will form the central focus of the plans and will be carefully restored with public accessibility at its core.

The 39-acre site fronts over 400 metres of London’s famous River Thames and is less than a mile and a half from the Houses of Parliament. It is directly opposite Chelsea and forms the cornerstone of central London’s last significant regeneration area, Nine Elms.

Battersea Power Station is fully supporting the proposed Northern Line Extension and is working with Transport for London and UK Infrastructure on the Transport and Works Act Order Application submitted in April 2013.