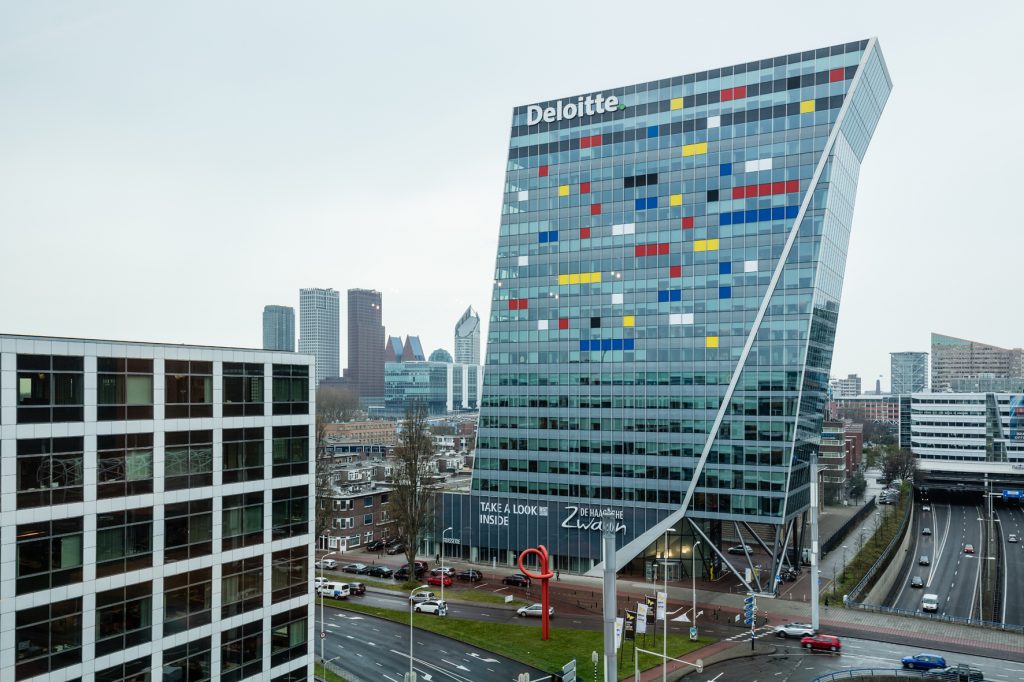 Anyone travelling into the city centre of The Hague along the A12 motorway in the coming months will encounter the art of Piet Mondrian in various public spaces, thanks to a major city dressing project. As the owner of one of the tallest buildings in the city, Union Investment is also taking part. The De Haagsche Zwaan office building rises to 73 metres, which together with its central location ensures maximum visibility for the chosen Mondrian tribute.

Artist Madje Vollaers from Studio VollaersZwart has covered some 200 sq m of the building’s façade across eight storeys in red, yellow and blue, the primary colours that are characteristic of Mondrian, supplemented by elements in white and black. This sets up a creative dialogue between the distinctive geometric mass of De Haagsche Zwaan and the pared-down, abstract language of the famous artist. The use of particularly hard-wearing coated film ensures that the impact of the colours will last for the duration of the project up to the end of 2017.

Studio VollaersZwart is known for its attention-grabbing work, which is characterised by the interaction between art, architecture and communication. In autumn 2014, the artist duo previously drew attention to the De Haagsche Zwaan building with the installation of a luminous ballet dancer on an exterior area of around 450 sq m. Union Investment has held the office property since 2010 as part of the portfolio of its open-ended real estate fund UniImmo: Europa. Tenants in the building include Deloitte, Q8, Aptitude Health and NACO.

Other buildings, including The Hague City Hall, are also taking part in the city dressing project. Piet Mondrian is being honoured to mark the founding of the De Stijl art movement 100 years ago, in which he played a major role. The theme of the anniversary year is “From Mondrian to Dutch Design”. The entire Mondrian collection of the Gemeentemuseum, comprising around 300 individual works, will be on display as part of the celebratory events.