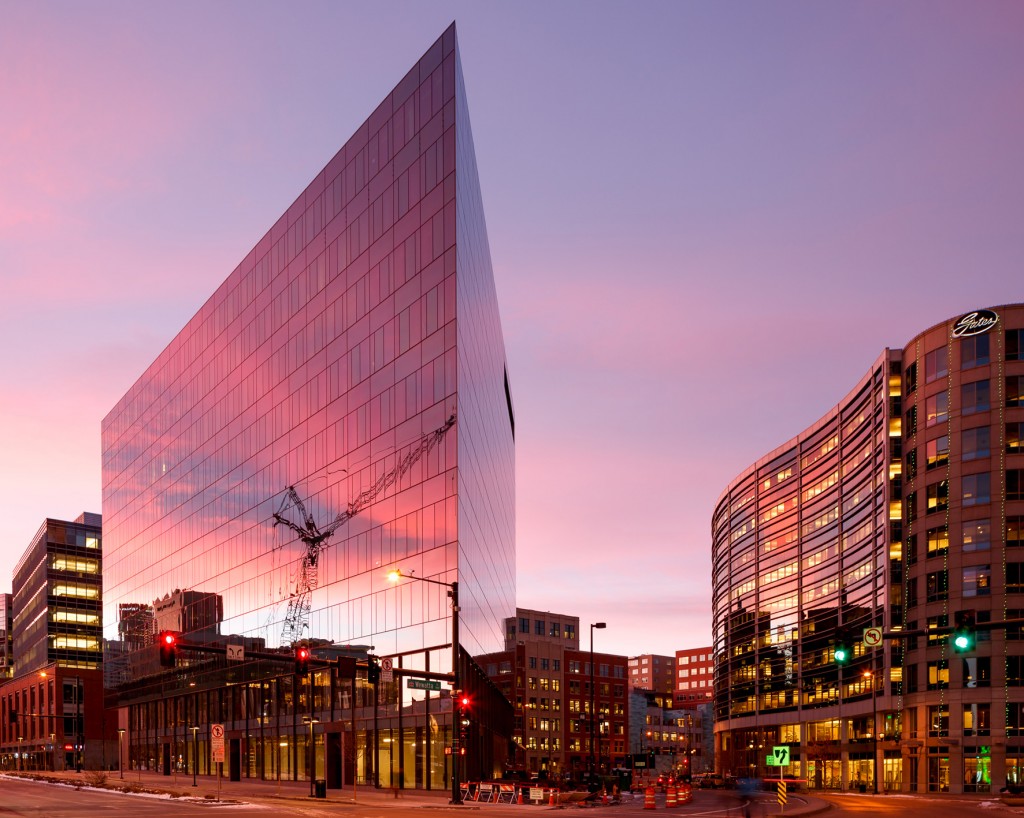 Union Investment announced today that it has acquired The Triangle Building in Denver, Colorado, from a controlled affiliate of Starwood Capital Group, a leading global private investment firm, and East West Partners, a Denver-based developer devoted to building, selling, managing and supporting high-quality real estate. The purchase price was approximately $154 million. The property will be added to the portfolio of open-ended retail real estate fund UniImmo: Global.

Completed in 2015 and offering some 21,000 sqm of space, the property boasts a unique, triangular shape that makes it one of the most distinctive office buildings in Denver’s Lower Downtown district. With its central location next to Union Station, the building is 98 percent leased and has quickly become an established landmark in the city. Union Station Development LLC serves as the vendor for The Triangle.

“With regard to location, construction quality and tenant structure, The Triangle is pretty much a perfect fit with our criteria for an office investment in the United States,” said Philip La Pierre, Head of Investment Management Overseas at Union Investment. “Denver is now the 16th location where we have a presence in the U.S. market, and UniImmo: Global and UniImmo: Europa provide us with two strong vehicles for additional investment in the future.”

The building’s shape results in distinctive floorplans that allow for efficient use by tenants. Oversized windows flood the offices with daylight and provide impressive views of the vibrant Lower Downtown neighbourhood. The main tenants of the Class A property—which holds LEED Gold certification–include the media firm Liberty Global, with 8,000 sqm, and WeWork, the world’s largest provider of co-working spaces, which occupies approximately 6,700 sqm. These two tenants together account for some 70 percent of the rentable area. In addition, the software company AutoDesk occupies 3,500 sqm. The 10-story property also includes an underground parking garage with 225 spaces spread over two levels.

The Triangle is situated directly opposite Union Station, which was recently redeveloped at a cost of some $500 million. Since then, it has become a central transport hub for Denver, with access to light and commuter rail services, as well as a number of bus routes. Thanks to a new direct link to Denver International Airport—the fifth-largest in the United States—approximately 100,000 passengers per day are forecast for Union Station.

The population of Denver’s Lower Downtown district has grown by 164 percent since 2000. In addition to offices and residential properties, the submarket features hotels and urban retail, as well as a wide range of bars, restaurants and other leisure facilities.

“The Lower Downtown submarket has emerged in recent years as a submarket that delivers a compelling combination of work, living and play,” said Matt Scholl, Head of Investment Management Americas at Union Investment Real Estate GmbH. “This mix attracts many companies and creates excellent conditions for commercial real estate investment.”

“Through a competitive process, we ultimately selected Union Investment for The Triangle because they are a great owner and manager of buildings,” said Chris Frampton, Managing Partner at East West Partners. “Union Investment owns iconic buildings in core locations all over the United States and Europe, and we believe The Triangle Building belongs in a portfolio of that calibre and quality.”

“The Union Station development afforded Starwood Capital the opportunity to invest in the early stages of a citywide renaissance,” added Dan Schwaegler, Senior Vice President at Starwood Capital Group. “With Denver continuing to flourish, our investment thesis has played out as anticipated. At the same time, The Triangle—along with other assets in this development including One Union Station and 16 Chestnut—underscores Starwood Capital’s proven ability to deliver top-quality assets that are highly desirable to investors. We are thrilled that our ambitious vision for The Triangle has come to fruition through a fantastic partnership with East West Partners, and excited to see what the future holds for this asset under Union Investment’s skilled management.”