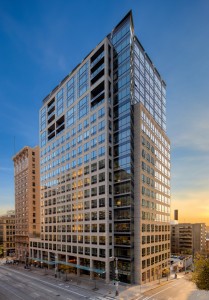 Union Investment has sold “Millennium Tower”, a 18,708 sqm office building located in Seattle, Washington to a property fund managed by TH Real Estate. The property was part of Union Investment’s portfolio since 2003. The 20-story property located at 719 Second Avenue is situated in the in the Seattle CBD and was fully occupied as of closing. The asset  holds a LEED “Gold” certification and the largest tenants in the building are Skytap and Van Ness Feldman. The transaction was executed  by Union Investment’s New York based investment team, advised by CBRE.

“Seattle and its office market have been a success story for Union Investment ever since we stepped into the market some 15 years ago. After having purchased the office tower “Midtown 21” located in the Denny Triangle and having entered the hotel market with the acquisition of the Hilton Garden Inn – both in 2017 -, the sale of Millennium Tower concludes a very special  year for Union Investment in the Seattle market,” comments Matt Scholl, Executive Director and Head of Investment Management Americas at Union Investment.“ Coupled with strong growth dynamics, Seattle as an investment market still offers both global and domestic investors a stable environment for achieving long-term sustainable returns. Seattle, and the surrounding region, will remain of interest for Union Investment as we look to further grow our core portfolio in the US in the near term,” comments Willis Kim, responsible for Union Investment’s investment management activities on the West Coast and Canada.

“With the property only a few blocks from commuter rail lines and waterfront transportation, Millennium Tower sits at the center of major commuter activity between the waterfront and Seattle’s downtown neighborhoods,” said Andrew Pyke, Regional Head of Northwest Investments at TH Real Estate, one of the largest global real estate investment managers, with $107bn in AUM. “We believe that the dramatic future redevelopment of Seattle’s waterfront will strengthen tenants desire to be in in close proximity to the waterfront and further enhance the attractiveness of the submarket.  Its easy accessibility, diversified tenant base, and modern office features solidify Millennium Tower’s qualification as a positive investment opportunity for TH Real Estate.”