Another strong start to the year with a transaction volume of around €12.1 billion was registered on the German investment market for commercial real estate in the first quarter of 2018. Although the investment volume dropped slightly below the previous year’s record result (down one percent), the ten-year average of first quarters was clearly exceeded by almost 70 percent. This is a conclusion drawn in a current analysis prepared by the global commercial real estate services company CBRE.

“Holding true in 2018 as well: Investors love German commercial real estate. Nevertheless, properties and portfolios are subjected to a thorough analysis as to the sustainability of location, technical standards and concept before investment decisions are made,” says Fabian Klein, Head of Investment at CBRE Germany. Germany continues to be a safe investment market in huge demand whose appeal, underpinned by strong fundamental data and sound economic growth, low unemployment and a steady and favorable interest rate environment, remains unbroken, especially for international investors. In comparison with the previous year, investors are again focusing increasingly on large-scale single assets, particularly office properties in the top locations.
Investment transaction volumes in Germany (commercial real estate; quarterly figures) 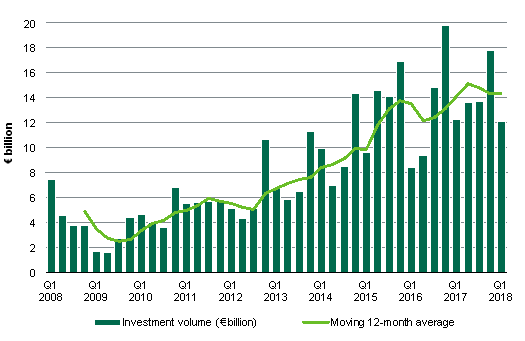 Germany still highly desirable for international investors
International investors invested a good €5.4 billion (45 percent) of the overall transaction volume, which is virtually the same amount as in the first quarter of 2017. In regional and B locations, they raised their share to just under 53 percent (Q1 2017: 48 percent).

At around one quarter of the investment volume, investors in European countries outside Germany, above all in the UK, committed particularly strongly to Germany’s commercial investment market. North American investors bought German commercial property worth almost €1.3 billion in total, and therefore accounted for 10 percent of the transaction volume, followed by Asian investors with a good €900 million, which is just under eight percent. “International investors are increasingly recognizing attractive potential outside the Top 7 locations. In contrast to European investors, North American and Asian investors therefore invested a large part of their volume outside the top locations – increasingly also in the context of nationwide portfolios,” Klein comments.

Transaction volume in most top locations above year-earlier level
While the nationwide transaction volume settled around the previous year’s level, the investment volume allocated to the Top 7 locations increased by 44 percent to almost €7.9 billion compared with the first quarter of 2017. Large-volume deals, especially in the office segment, brought the share of this asset class in the overall volume of the Top 7 locations to 75 percent, which is also significantly higher than the figure for the whole of Germany. Of the 10 largest transactions, eight alone were single deals involving office buildings in Frankfurt, Hamburg and Munich, which resulted in very sharp increases being registered in the transaction volume overall in these locations.

In addition, Düsseldorf and Stuttgart also reportet considerably higher transaction volumes compared witht he year-earlier period, as oposed to Berlin and Cologne where volumes declined. In Berlin, the pronounced shortage of product constrained the transaction volume; nevertheless, a few transactions are on the verge of being concluded. In Cologne, the current result has to bear comparison with an extremely strong year-earlier quarter, with major deals such as the Friesen-Quartier and Gerling-Quartier, as well as the HBC Europe Service Center. 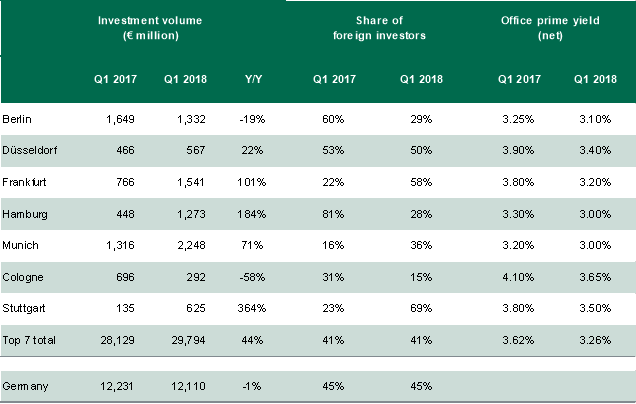 Source: CBRE Research, Q1 2018.
Office real estate remains strongest asset class – retail segment in decline
More than half the entire transaction volume in Germany was accounted for by office properties that therefore still top the list of investor favorites. At €6.8 billion, almost €1.3 billion more was invested in this asset class compared with the year-earlier period, mainly in the form of single asset deals. Against the backdrop of the ongoing positive development of Germany’s top office markets, this asset class is set to remain attractive. In second place came warehouse and logistics real estate with 15 percent of the investment volume (a good €1.8 billion). The lion’s share here was attributable to acquisitions of large nationwide portfolio takeovers. Compared with the first quarter of 2017, 31 percent more was invested in this asset class that was also rated in the CBRE EMEA Investor Intentions Survey 2018 as the most attractive investment class, ahead of office real estate for the first time. Retail property took third place. This asset class accounted for just under €1.6 billion, representing a share of only 13 percent in the overall volume. Among other factors, this development was due to supply shortage in the top locations. Outside the investment centers, retail was the second strongest asset class following on from warehouse and logistics properties, due mainly to investment in the retail warehouse and retail park segment.

Yield compression ongoing in selected instances
Despite the sustained high demand and severely limited availability, net initial yields remained stable in most markets and asset classes compared with the fourth quarter of 2017. Net initial yield for first rate office properties in premium locations in the Top 7 investment markets came in at 3.26 percent, albeit marginally lower than the previous year’s figure (3.28 percent), as prime yields in all markets – with the exception of Hamburg which registered a slight decline of 10 basis points – remained stable compared with year-end 2017. Investors continue to increasingly turn their attention to the city fringe and peripheral areas of the top locations, which is the reason for yields being under pressure here as well. A decline was registered in peripheral locations in Hamburg (down 10 basis points) and Munich (down 25 basis points).

The yield for high street retail properties in central locations in the top markets averaged 3.16 percent, reflecting the level of the final quarter of 2017 as well. By contrast, further yield declines were reported in the large-scale retail segment, first rate shopping centers in top locations and retail parks for instance, that came under pressure from strong demand.

In the formerly alternative asset classes of hotels and logistics, net initial yields for premium properties remained stable at 4.00 percent and 4.40 percent respectively.

Outlook for 2018: ongoing strong investment momentum – supply shortage as factor of constraint
“Germany continues to be viewed as one of the most attractive and secure investment markets in Europe, both by domestic and foreign investors,” Klein says. The new year is seeing positive macro and property-related fundamentals. Consequently, demand for German real estate should remain high. Ongoing supply shortage is the greatest impediment, along with the price level. Competition for attractive properties will keep up the pressure on prime yields. “To build up their real estate portfolios despite the supply shortage, some investors are increasingly considering taking over real estate companies and platforms. Other investors are looking at B locations or alternative real estate asset classes,” Klein explains. This approach also enables greater risk diversification and benefits to be reaped from the structural developments in these asset classes. All in all, an annual transaction volume of around €50 billion can be viewed as realistic.